The atrium of the Basilica of St. Francis of Assisi, in the same Italian city, was the setting for a beautiful artistic evening that took place at sunset on Saturday, May 28, the Laudato Si’ Festival was a musical event and focused on eco-spirituality and art.

Hosted by Marco Mammoli, the festival included a variety of songs in praise of “sweet Mother Earth”, the Creator and those who inhabit our beloved Common Home. In addition, representatives from different communities participated and shared how they live their spirituality connected to Laudato Si’.

It was an unmissable festival, for the whole family! Watch it here:

Father Marco Moroni, Custodian of the Sacred Convent, affirmed that in Assisi “there is a combination of art, culture and nature, which is something wonderful”. St. Francis of Assisi had his charism revealed to him there and it is a place where “creation really breathes,” said Friar Marco.

Antonio Caschetto, Program Coordinator in Italy for the Laudato Si’ Movement, also participated, mentioning that eco-spirituality is fundamental in the movement’s programs, especially for Laudato Si’ Animators and said, recalling Pope Francis: “The talents of each one are necessary to repair the damage to the planet. Let us put our talents at the service of creation”. 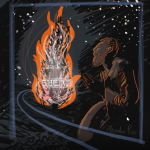 For this reason, Alessandro Pucci, Laudato Si’ Animator, was present in a video to show his talents, “which are to be shared.” “While I am praying I get the inspiration to draw,” he said as he explained and showed a drawing of St. Francis of Assisi.

The musical interventions were developed by Luca Terrana, Father Mimmo Iervolino, Spanish artist Migueli, and Matteo Manicardi. Each song was inspired by Laudato Si’ and was born in the hearts of these artists in different ways. Each of them gave their testimony. 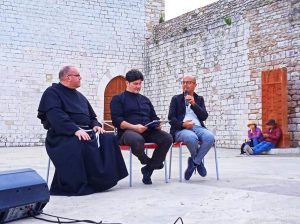 Bishop Domenico Sorrentino of Assisi also shared a version of the Canticle of the Creatures, created for the 2020 Time of Creation. Sister Susan Morrisset, of the Franciscan Sisters of the Order of the Expiation, recounted how in her community they share and celebrate “our wonder and joy in creation.”

Giulio Cesareo, Director of Communications of the Sacred Convent of Assisi, spoke of the importance of communication, which “is not only giving information but giving oneself to others. And here God is present, who gives himself out of love”. 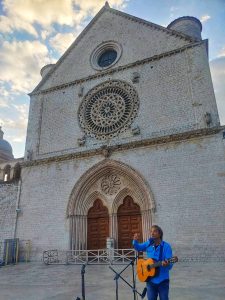 Later and in connection from New York, Christina Leaño, Associate Director of the Laudato Si’ Movement, mentioned some of the resources that the Laudato Si’ Movement has to delve into eco-spirituality. “In recent years we have been inspired by the encyclical to develop a communion with creation and with our Creator. We are inspired by St. Francis looking for ways to cultivate this relationship,” Christina said.

Finally, Marco Mammoli closed the festival by singing “L’Emmanuel,” a song “inspired by my encounter with Jesus at the age of 18,” and the theme song that was chosen for World Youth Day 2000. The audiovisual production of this event was made by Maria Vision Italia.